The knives are flying at the Japanese-restaurant chain.

If you want to pinpoint the moment when the battle over Benihana escalated from mere belligerence to full-on absurdity, it would be when a federal court issued an injunction to block the Beni Burger.

It was not, to be sure, the first point of contention in the fight over the global restaurant brand, nor the only one to make it to litigation. Other issues still to be resolved by judicial organs include the use of garlic butter, the proper way to beat out a rhythm with salt and pepper shakers, and whether the authenticity of a chain that made its name through “eatertainment”—its red-chef’s-hat-wearing tableside cooks are famous for twirling and flipping forks and spatulas while dispensing a stream of corny jokes—is diminished by having hip-hop dancers in chefs’ outfits perform in one of its restaurants. 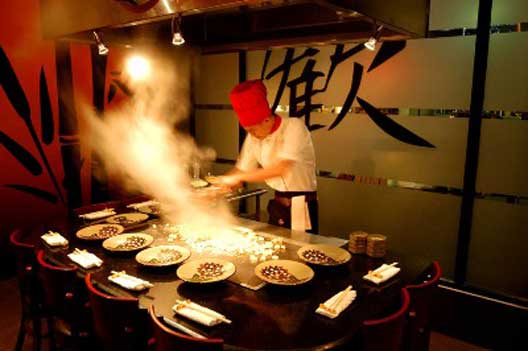 Still, you could say the beef over the Beni Burger is when the fight got personal. The item was conceived by Keiko Ono Aoki, widow of the chain’s founder, Rocky Aoki. (We’ll refer to her as Ono to avoid confusion.) Her company, Benihana of Tokyo, owns or franchises 18 restaurants from Europe to Asia and also manages the Benihana at the Hilton Hawaiian Village Waikiki hotel. Ono thought that selling a burger—this one is topped with shrimp tempura and special sauce—from a cart near the beach at Waikiki would capture foot traffic and attract some extra lunchtime revenues.

Not so fast, countered Benihana Inc., a separate entity that owns 79 Benihanas in the U.S. and South America—including, awkwardly, the Waikiki restaurant managed by Ono’s group. Benihana Inc., which is owned by investment firm Angelo Gordon, contended that Benihana bylaws prohibit something as pedestrian as a burger, that the notion of selling meat on a bun was most un-Benihana, and that Ono was cheapening the brand.

Ono isn’t one to be pushed around. She went to court seeking an order to defend her right to sell the Beni Burger—only to lose. How did she react? She kept right on selling the sandwich, now relabeled the Tokyo Burger. Benihana Inc. returned to the court in which Ono had filed her action, and in February 2014 an annoyed-sounding judge issued an injunction forbidding the sale of any burgers—Beni, Tokyo, or otherwise.

It all makes Ono sigh. She was Aoki’s third wife and thinks of herself as having his entrepreneurial spirit. (She also dreamed up the idea for the hip-hop dancers, whom she dubbed the Beni Girls.) She sees herself as dedicated to his legacy, and she’s particularly irked by the spat over the burger, a product she views as embodying the sort of creative thinking her husband excelled at. As she puts it, “The hamburger is going to hurt the Benihana brand, they say. I don’t think so.”

Ono dismisses Angelo Gordon as “investment bankers.” She adds, “I’m not sure they understand Rocky’s concept.” Ono is sitting in her airy 34th-floor apartment, which looks down on Saint Patrick’s Cathedral in Manhattan. Petite, energetic, and charming, she doesn’t look anywhere close to her 59 years. She is attended by a lawyer and her Wheaten terrier, Mugi, which interrupts Ono with even more frequency than the attorney.

A former runner-up for Miss Tokyo, Ono came to the U.S. to make her fortune. As a consultant, she has advised giant corporations such as Bayer and was credited with bringing the Wonderbra to Japan. She also has a history of nasty schisms and litigation in her business ventures.

Ono’s clash over the Beni Burger is downright friendly (and recent, having begun in 2013) compared with her ongoing war with six of Aoki’s seven children. Two of those younger-generation Aokis are locked in litigation with her for the trust that controls Benihana of Tokyo. That case has been inching its way through the legal system since 2008. (The two litigants are actually the ones who had better relations with their dad; four of their siblings and half-siblings were disinherited, and the final one, born out of wedlock, was never in Aoki’s will.) The battles, it seems, will continue for years.

As in any dispute, the various parties blame one another:

No, that schemer Ono broke up the family!

No, it’s Ono who knows nothing about restaurants and is ruining the business!

Not since a different Ono was accused of breaking up the Beatles has one diminutive woman been blamed for so much turmoil. In truth, her late husband bears much of the responsibility. He was the one to divide his empire into separate entities with shared responsibility for the restaurant in Hawaii. That worked well enough when he was at the peak of his power but proved disastrous afterward. And Aoki was the one who repeatedly rewrote his will, sowing confusion and resentment.